Around the world women and girls are disproportionately affected by poverty. In most countries, women earn 60-75% of men’s wages on average, and this gap widens based on race and ethnicity. A recent study found that 79 countries around the world have laws that restrict the types of work women can do. Globally, women are less likely to own land, receive a secondary education, have access to a banking institution, and in low income communities, maternal mortality rates skyrocket. These statistics are even higher for women of color. Moreover, this inequality has only been further highlighted by the recent impacts of the global pandemic, Covid-19.

And yet, it has been proven that investing in women and girls is beneficial to the economy and society overall. Compared to men, women are more likely to pay off loans and invest their earnings into familial units, having a positive ripple effect in their communities. Moreover, when women and girls have proper access to education and stable financial support, the chance of teen pregnancies, maternal deaths, child marriages, and gender-based violence decreases significantly.

Despite these correlations, it’s projected that global gender equality will not be reached for another 108 years. To help us understand the challenges to global gender equality, especially in-light of Covid-19, the Columbus Council on World Affairs has invited Gayle Smith to lead us in a discussion around this very important topic. 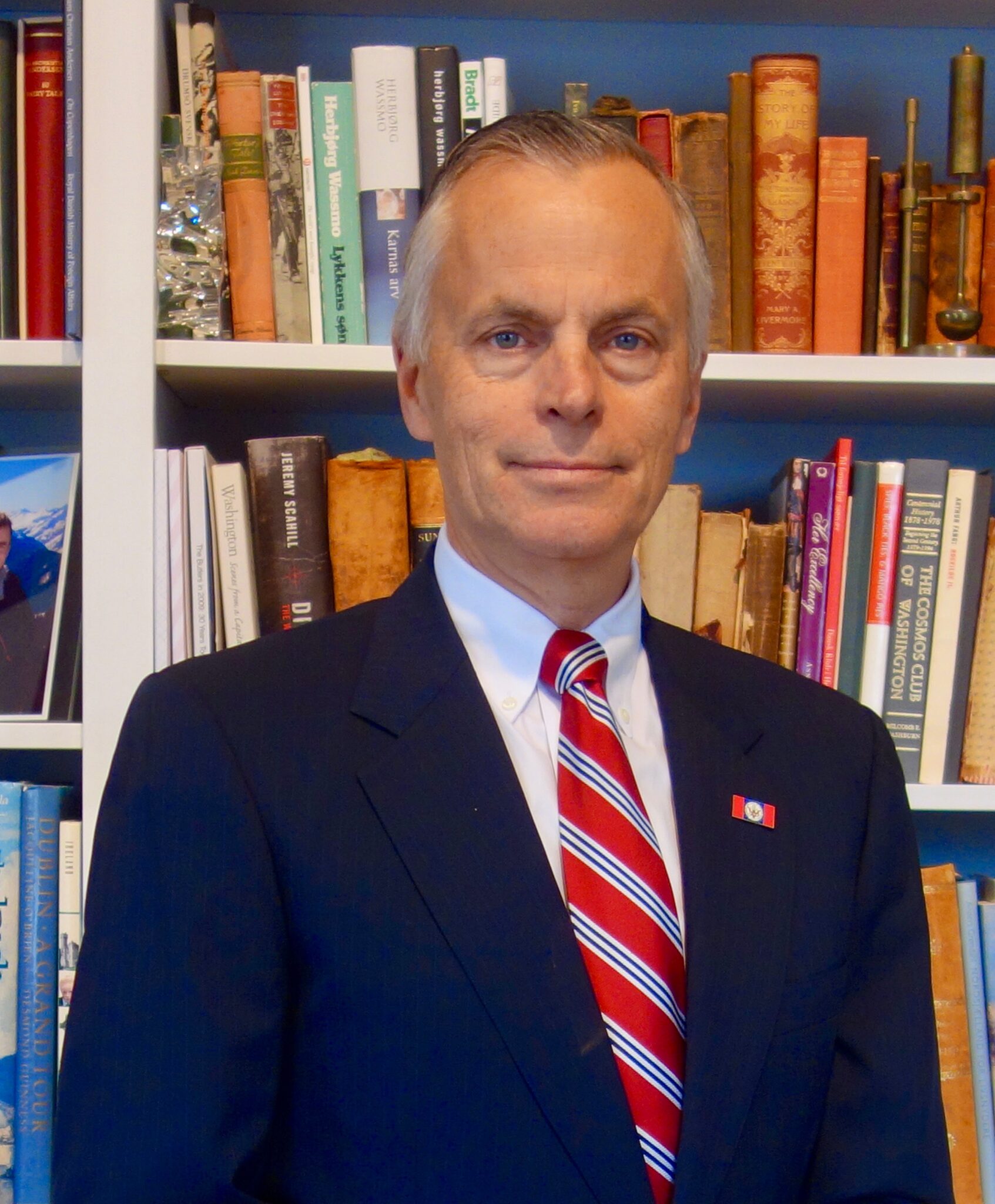 Ambassador Butler spent 40 years with the U.S. Foreign Service, usually as far from Washington as he could get. Currently he supports U.S. military exercises, including replicating NATO’s role in European scenarios, and playing the role of U.S. Ambassador – scenario dependent, as well as POLAD (Foreign Policy Advisor) to Corps and Division HQs and US Special Forces teams. His final official assignments included: Civilian Deputy to the Commander and POLAD, United States European Command in Stuttgart; Foreign Policy Advisor to the Commander, U.S. Forces in Iraq for Operation New Dawn; and Foreign Policy Advisor for the Supreme Allied Commander Europe (SACEUR) at SHAPE/Allied Command Operations in Belgium.

While in Iraq 2010-2011, Ambassador Butler guided the US military command in transitioning operational lead to the U.S. Embassy. He engaged directly in mediating tensions between Kurdish and Iraqi forces in the sensitive, oil-rich Kirkuk region,
initiated the process that removed the Iranian MEK from Camp Ashraf while negotiating with the Iraqi Government to minimize violence, provided guidance to the U.S. Commander on engaging with Gulf Allies during this period, including developing a work around on finalizing the seminal F-16 sale to Iraq, and engaged Turkish authorities to moderate rising tensions with the Kurdistan Regional Government.

This was Ambassador Butler’s second involvement with Iraq, having served as President Bush’s Deputy Assistant Secretary for Near East Asia, in charge of State Department Iraq policy and operations 2007-2008. Butler orchestrated the “civilian surge” that deployed new Provincial Reconstruction Teams embedded with each of the 15 surge BCTs, and successful engaged in outreach to sustain the coalition, visiting more than 20 non-NATO member countries to keep them involved.

Between Iraq engagements, while at NATO with SACEUR 2008-2010, Ambassador Butler was involved with NATO’s Afghanistan and Balkans operational issues reflecting SACEUR’s role as the higher HQ for ISAF and Kosovo. He regularly visited Afghanistan with SACEUR and provided new thinking for NATO and U.S. policy development, particularly with Afghanistan’s neighbors, as well as guided engagement with both NATO and future NATO alliance members.

Since formal retirement (and a three year period of re-employment by the State Department for special projects and inspections), Ambassador Butler provides subject matter expertise to the Army’s Futures and Concepts Center (FCC) as well as to Geographic Combatant Command, Army Corps, Division, and Brigade-level exercises, with particular focus on INDOPACOM and USEUCOM area of responsibility priorities.

Previous key assignments include: 2005-2007, Ambassador Butler served as the Principal Deputy High Representative for Bosnia and Herzegovina, a UN-linked international position responsible for Dayton Peace Accord implementation; He was the US Ambassador to Macedonia, 2002-2005, where he implemented the Ohrid Peace Agreement and helped mentor Macedonia towards Euro-Atlantic integration. As Director for Europe on the White House National Security Council staff, 1997-1999, he was the staff lead for President Clinton in achieving the 1998 Northern Ireland Good Friday Peace Accords. Earlier, Ambassador Butler was initially the Deputy Chief of Mission and then acting Chief of Mission in Belgrade, Serbia, supporting efforts that led to the 1995 Dayton Accords, and then enabling their implementation. In 1993, he opened a conflict prevention/human rights monitoring office of the Organization for Security and Cooperation in Europe (OSCE) mission to Kosovo.

Ambassador Butler’s other leadership assignments include tours as Deputy Chief of Mission in Copenhagen and Dublin, and Cold War-era section chief postings in Finland and Bulgaria. In Washington, he worked on European Union trade policy and political
affairs and served as a State Department Operations Center Senior Watch Officer, where he was on duty the day of the attempted Moscow coup of 1991.  Ambassador Butler has received numerous awards, including the Chairman of the Joint Chiefs of Staff Joint Distinguished Civilian Service Award, multiple Senior Performance Pay awards, and State Department Superior Honor and Meritorious Honor Awards. He was educated at Bowdoin College (Maine), Michigan (MBA) and Princeton (MCF). He speaks Portuguese, Finnish, Bulgarian, Macedonia, Serbian, Swedish and Danish, can hold his own in Spanish and can cheerfully insult people in German and French without understanding the responses.

Ambassador Butler’s education includes high school in Brazil, a BA from Bowdoin College, MBA program at UMichigan and MCF at Princeton’s Woodrow Wilson School. He is a proud Army brat, born at Fort Benning into an Army family with Maine roots. His father earned the Distinguished Service Cross and Purple Heart in Korea in 1950 and posthumously a Silver Star in Vietnam. He and his wife Linda have a seasonal home in Maine and enjoy winter and water sports, tennis, and hiking. He was an international ice hockey referee for 15 years. They have one adult son.

Milan Vaishnav is a senior fellow and director of the South Asia Program at the Carnegie Endowment for International Peace. His primary research focus is the political economy of India, and he examines issues such as corruption and governance, state capacity, distributive politics, and electoral behavior.

September 10 | World Affairs Council of Philadelphia | Moving Forward: How Do We Unite Americans in 2021 and Beyond?

Join the World Affairs Council of Philadelphia for a conversation with General Wesley Clark (ret.), Founder of Renew America Together, and the Honorable Larry Hogan, Governor of Maryland, to hear how they believe we can bring our country together.

Something extraordinary is happening in Saudi Arabia. A traditional, tribal society once known for its lack of tolerance is rapidly implementing significant economic and social reforms. An army of foreign consultants is rewriting Saudi Arabia’s social contract, King Salman is cracking down hard on corruption, and his dynamic though inexperienced son, the Crown Prince Mohammed bin Salman, is promoting a more tolerant brand of Islam. But is all this a new vision for Saudi Arabia or merely a mirage likely to dissolve into a more autocratic police state or an Iranian-style religious revolution?

David H. Rundell – widely regarded as one of America’s foremost experts on Saudi Arabia – explains why the country has been so surprisingly stable for so long, is less stable today, and what is likely to happen there in the future. “Vision or Mirage” demystifies the world’s last strategically important absolute monarchy. It will prove valuable to anyone interested in global energy markets, the Arab-Israeli conflict, counterterrorism or regional stability in the Middle East.