Across multiple administrations since the end of the Cold War, American foreign policy has been misconceived, inconsistent, and poorly implemented. As a result, America and the free world have fallen behind rivals in power and influence. Meanwhile threats to security, freedom, and prosperity, such as nuclear proliferation and jihadist terrorism have grown.

H. R. McMaster was the 26th assistant to the president for National Security Affairs. He served as a commissioned officer in the United States Army for thirty-four years before retiring as a Lieutenant General in June 2018.

From 2014 to 2017 McMaster designed the future army as the director of the Army Capabilities Integration Center and the deputy commanding general of the US Army Training and Doctrine Command (TRADOC). As commanding general of the Maneuver Center of Excellence at Fort Benning, he oversaw training and education for the Army’s infantry, armor, and cavalry force. His led soldiers and organizations in wartime including command of a multi-national task force in Kabul, Afghanistan; the 3rd Armored Cavalry Regiment in Iraq; and Eagle Troop, 2nd Armored Cavalry Regiment in Operation Desert Storm. McMaster also served overseas as advisor to the most senior commanders in the Middle East, Iraq, and Afghanistan.

McMaster was an assistant professor of history at the United States Military Academy from 1994 to 1996 where he taught undergraduate courses in military history and history of the Korean and Vietnam Wars. He also taught a graduate course on the history of military leadership for officers enrolled in the Columbia University MBA program.

He is author of the award-winning book, Dereliction of Duty: Lyndon Johnson, Robert McNamara, the Joint Chiefs of Staff and the Lies that Led to Vietnam and Battlegrounds: The Fight to Defend the Free World. He has published scores of essays, articles, and book reviews on leadership, history, and the future of warfare in many publications including Foreign Affairs, The Wall Street Journal, and The New York Times. He was a contributing editor for Survival: Global Politics and Strategy from 2010 to 2017.

On Wednesday, December 2nd at 6PM, join the World Affairs Council of New Hampshire in welcoming former Secretary of Defense Chuck Hagel for Night Two of our premier annual fundraiser, our Fall Forum! Our second night with Secretary Hagel will feature a conversation on American Foreign Policy and what impacts the results of the Presidential election will have moving forward for the United States as a leader in the world.

Following Secretary Hagel's remarks, a moderated Question and Answer session will be held. All questions can be emailed to council@wacnh.org, or sent through the messenger app on our website, so purchase your tickets at wacnh.org and we hope to see you there!

The Annual Fall and Spring Forums are WACNH's premier fundraising events for the year and helps us raise funds to continue our work and bring you a full year's worth of awesome programming and events. Due to the ongoing pandemic forcing us to cancel our Spring Forum in June, we will be bringing two nights of awesome virtual programming for you all this season.

No matter who will be sitting in the Oval Office on January 21, 2021, they will be confronted with multiple nuclear crises. They will have to make choices that will affect whether we are living in a world in which the number of nuclear weapons is going up or going down. These choices will be related to both internal and external policies. Should we use nuclear weapons first in a crisis? Do we need more than one person involved in the authorization of a nuclear strike? Is it is a good idea to invest in new low-yield nuclear capabilities? Should we reenter what's left of the Iran Deal? How do we make arms control agreements with Russia when the trust between our nations is broken?

Join the World Affairs Council of New Hampshire and the League of Conservation Voters for the final installment in our virtual Global Tipping Points speaker series this Fall! Our December edition will feature United States Senator from New Hampshire, Jeanne Shaheen, President Obama's chief climate negotiator and current Brookings nonresident senior fellow, Todd Stern, as well as President of the American Security Project, Brigadier General Stephen Cheney, as they discuss what they believe a strategy to combat climate change will look like under a new Biden administration and what the election's results mean for the world's climate future.

This discussion will be moderated by Rob Werner of LCV and WACNH Board Member Maura Sullivan.

Following the opening remarks, a moderated Question and Answer session will be held. All questions can be emailed to council@wacnh.org, posted in either of the YouTube or Facebook Live chats, or the messenger app on our website, so tune in at wacnh.org and we hope to see you there!

The US Department of State Bureau of Western Hemisphere Affairs Deputy Director for Venezuelan Affairs Marlaina R. Casey, will address community members of the World Affairs Council of Western Massachusetts on December 9 at 4:00 PM EST. Ms. Casey will provide insight into the ongoing situation in Venezuela and US foreign policy in the region.

Marlaina Casey has worked for the State Department since 2007 in various capacities including as Director of International Narcotics and Law Enforcement in Sarajevo, Bosnia and Herzegovina; Migration and Security Advisor for the Bureau of Western Hemisphere Affairs; Strategic Communications Officer for Mexico and Canada; Deputy Political Chief and Deputy Consular Chief in Amman, Jordan; Desk Officer for Rwanda and Burundi; and Special Assistant to the U.S. Special Envoy to Africa’s Great Lakes Region. Ms. Casey obtained her MPA and BA from the University of Delaware and studied Spanish at the University of Modern Languages in Granada, Spain.

The cost for this event is $10, free for students. 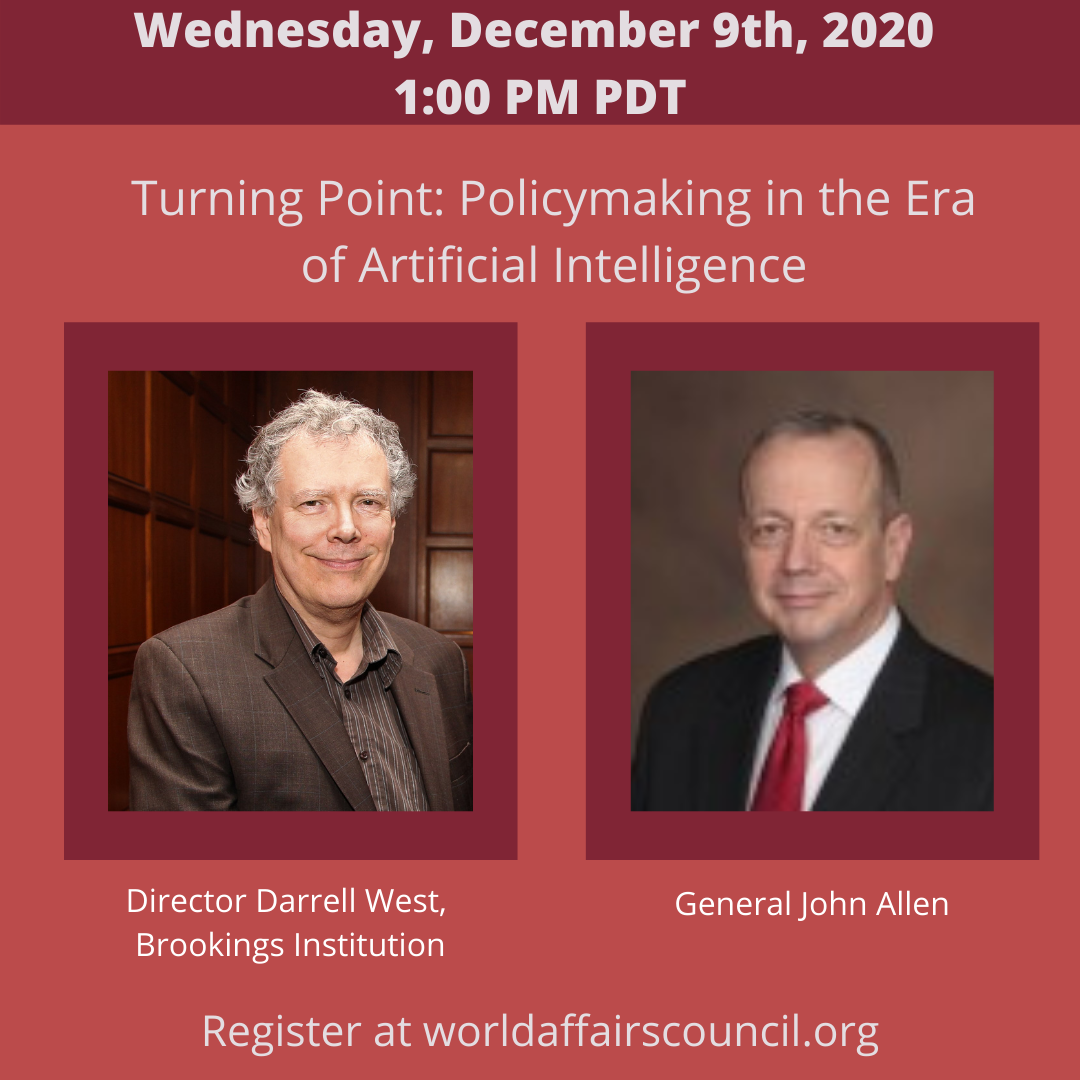 Turning Point: Policymaking in the Era of Artificial Intelligence

John Rutherford Allen assumed the presidency of the Brookings Institution in November 2017, having most recently served as chair of security and strategy and a distinguished fellow in the Foreign Policy Program at Brookings. Allen is a retired U.S. Marine Corps four-star general and former commander of the NATO International Security Assistance Force (ISAF) and U.S. Forces in Afghanistan.

Beyond his operational and diplomatic credentials, Allen has led professional military educational programs, including as director of the Marine Infantry Officer Program and commanding officer of the Marine Corps Basic School. He twice served at the United States Naval Academy, first as a military instructor, where he was named instructor of the year in 1990, and later as commandant of midshipmen; the first Marine Corps officer to hold this position. Allen was the Marine Corps fellow to the Center for Strategic and International Studies and the first Marine officer to serve as a term member of the Council on Foreign Relations, where today he is a permanent member.

Among his other affiliations, Allen is a senior fellow at the Merrill Center of the Johns Hopkins School of Advanced International Studies and a senior fellow at the Johns Hopkins Applied Physics Laboratory. He is an “Ancien” of the NATO Defense College in Rome, and a frequent lecturer there. Allen is the recipient of numerous U.S. and foreign awards.

Darrell M. West is the Vice President and Senior Fellow of Governance Studies at the Brookings Institution. He holds the Douglas Dillon Chair in Governance Studies. Previously, he was the John Hazen White Professor of Political Science and Public Policy and Director of the Taubman Center for Public Policy at Brown University. His current research focuses on American politics, technology policy, and artificial intelligence.

He is the winner of the American Political Science Association’s Don K. Price award for best book on technology (for Digital Government) and the American Political Science Association’s Doris Graber award for best book on political communications (for Cross Talk). His books have been translated into Chinese, Japanese, and Korean, and he has delivered lectures in numerous countries around the world.

This short program will feature a simple yet scrumptious holiday recipe from Colorado Springs Food Rescue, Colorado Springs World Affairs Council will share fun and unique traditions that ring in the New Year around the world! And Ormao Dance will offer interludes of international holiday dance traditions.  This is a free event, but donations are appreciated. 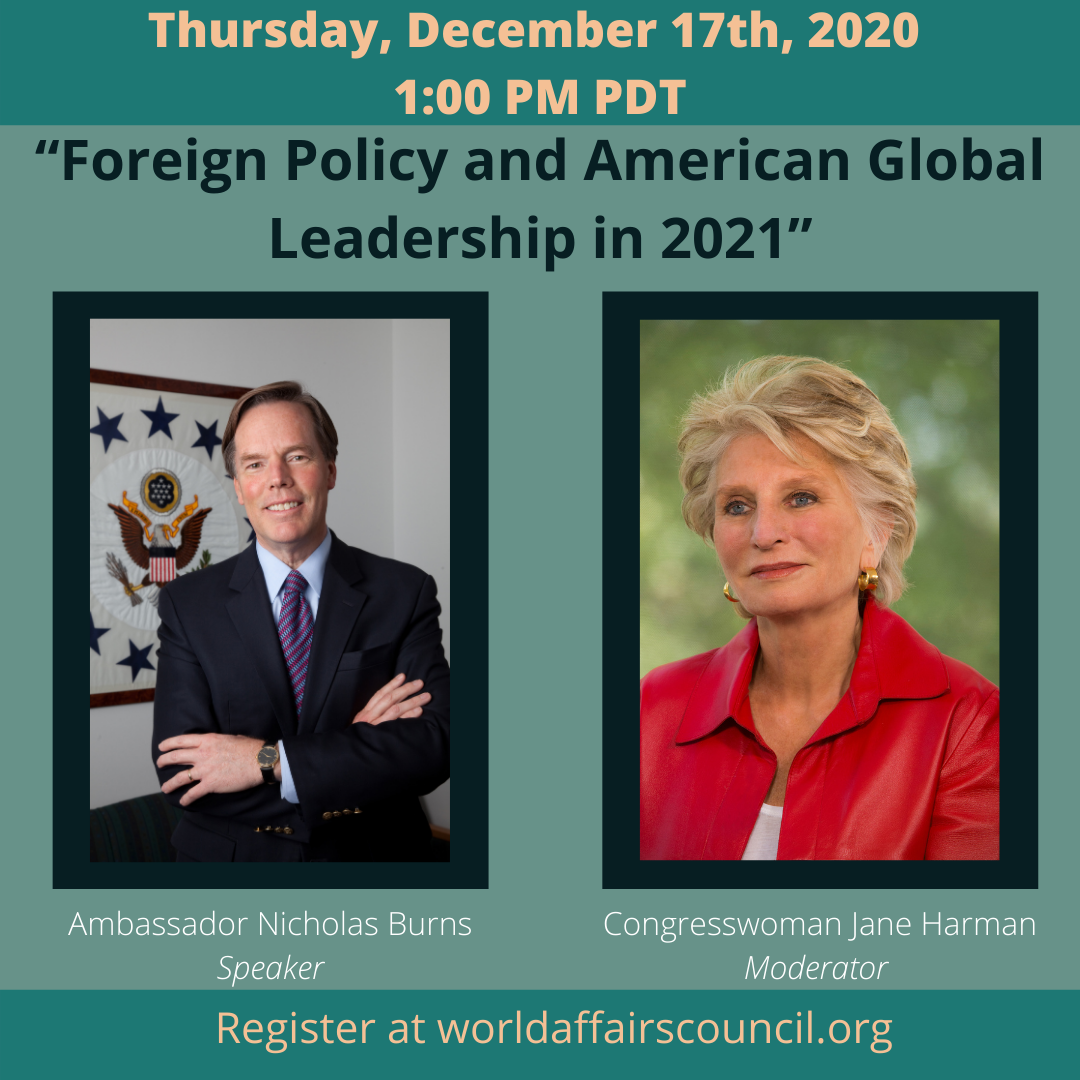 Please click this URL to join. https://zoom.us/s/93336223968
Description: Ambassador Nicholas Burns is the Roy and Barbara Goodman Family Professor of the Practice of Diplomacy and International Relations at the Harvard Kennedy School. He is the founder and Faculty Chair of the Future of Diplomacy Project and Faculty Chair of the Project on Europe and the Transatlantic Relationship.

Ambassador Nicholas Burns is the Goodman Professor of the Practice of Diplomacy and International Relations at Harvard Kennedy School.?He is Faculty Chair of the Future of Diplomacy Project and also of the Project on Europe and the Transatlantic Relationship at the Kennedy School’s Belfer Center for Science and International Affairs. Burns is Executive Director of the Aspen Strategy Group and the Aspen Security Forum; he is Senior Counselor at The Cohen Group. He is Chairman of the Board of Our Generation Speaks, which seeks to bring together young Palestinians and Israelis in common purpose.

Burns served in the United States government for 27 years as a career Foreign Service Officer. He was Under Secretary of State for Political Affairs (2005-2008), U.S. Ambassador to NATO (2001-2005), U.S. Ambassador to Greece (1997-2001), and State Department Spokesperson (1995-1997). He worked at the National Security Council as Senior Director for Russia, Ukraine and Eurasia Affairs; Special Assistant to President Clinton; and Director for Soviet Affairs for President George H.W. Bush. Burns served in the American Consulate General in Jerusalem where he coordinated U.S. economic assistance to the Palestinian people in the West Bank and before that, at the American embassies in Egypt and Mauritania. He earned a bachelor’s degree in history from Boston College and a master’s degree in international relations from the Johns Hopkins School of Advanced International Studies.

Jane Harman resigned from Congress February 28, 2011 to join the Woodrow Wilson Center as its first female Director, President, and CEO.

Representing the aerospace center of California during nine terms in Congress, she served on all the major security committees: six years on Armed Services, eight years on Intelligence, and eight on Homeland Security. During her long public career, Harman has been recognized as a national expert at the nexus of security and public policy issues, and has received numerous awards for distinguished service.

She serves on the Executive Committee of the Trilateral Commission and the Advisory Board of the Munich Security Conference. She co-chairs the Homeland Security Experts Group with former Homeland Security Secretary Michael Chertoff.

Harman is a Trustee of the Aspen Institute and an Honorary Trustee at the University of Southern California. She serves on the board of Iridium Communication Inc, a NASDAQ traded satellite communications company, and is a member of the Presidential Debates Commission and the Committee for a Responsible Federal Budget.

She has four adult children and eight grandchildren.