WorldBoston's Chat & Chowder features key authors on international affairs in an engaging setting. Even virtually, the spirit of Chat & Chowder persists! We encourage everyone to BYOCB (Bring Your Own Chow(der) & Beverages), and also to join us for the informal post-Chat Chat, led by a WorldBoston friend (separate Zoom link will be provided). Longtime and first-time chatters alike are welcome!

In summer of 2021, the United Nations Intergovernmental Panel on Climate Change (IPCC) released the first portion of its Sixth Assessment Report, Climate Change 2021: The Physical Science Basis. The report addresses the most up-to-date physical understanding of the climate system and climate change, bringing together the latest advances in climate science, and combining multiple lines of evidence from paleoclimate, observations, process understanding, and global and regional climate simulations.

The role of the Intergovernmental Panel on Climate Change (IPCC) is to assess the scientific, technical, and socio-economic information relevant to the understanding of climate change, its impacts and future risks, and options for adaptation and mitigation. Hundreds of leading experts in the different areas covered by IPCC reports volunteer their time and expertise as authors. One contributing author to the Sixth Assessment Report is Baylor Fox-Kemper.

Baylor Fox-Kemper is a professor at Brown University, joining the Department of Earth, Environmental, and Planetary Sciences in 2013. He works mostly within the Climate and Environment Group, which studies the physics of the ocean and how the ocean fits into the Earth's climate system, using models that range from the global scale to focused process models that apply universally. The group seeks mathematically interesting problems with practical uses. Fox-Kemper was a coordinating lead author of the Ocean, Cryosphere, and Sea Level Change chapter of the IPCC Sixth Assessment Report. 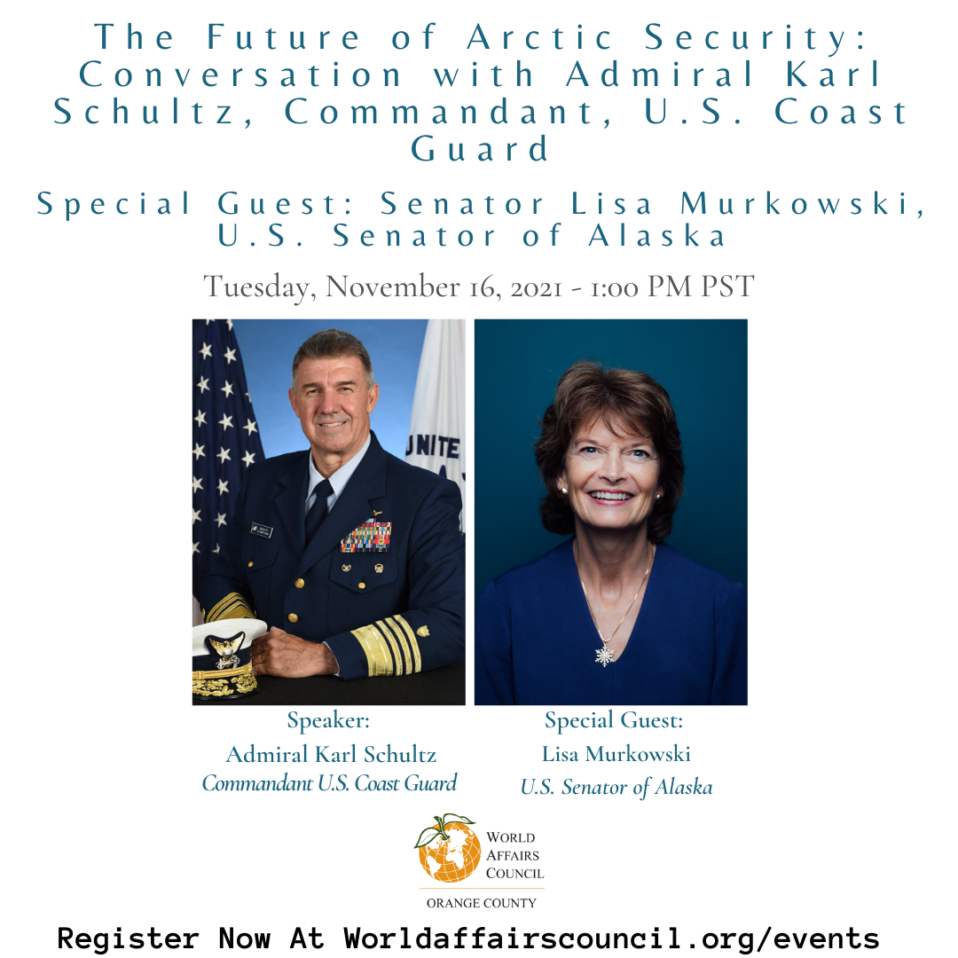 Admiral Karl L. Schultz assumed the duties as the 26th Commandant of the United States Coast Guard on June 1, 2018. As Commandant, he oversees all global Coast Guard operations and 41,000 active-duty, 6,200 reserve, and 8,500 civilian personnel, as well as the support of 25,000 Coast Guard Auxiliary volunteers.

He previously served from August 2016 to May 2018 as Commander, Atlantic Area where he was the operational commander for all Coast Guard missions spanning five Coast Guard Districts and 40 states. He concurrently served as Director, DHS Joint Task Force-East, responsible for achieving the objectives of the DHS Southern Border and Approaches Campaign Plan throughout the Caribbean Sea and Eastern Pacific Region, including Central America.

His senior staff assignments include Chief of the Office of Congressional and Governmental Affairs; Congressional Liaison to the U.S. House of Representatives; Liaison Officer to the U.S. Department of State, Bureau for International Narcotics and Law Enforcement Affairs; Assignment Officer at the Coast Guard Personnel Command; and Command Duty Officer in the Seventh Coast Guard District Operations Center in Miami.

A native of Connecticut, Admiral Schultz graduated from the Coast Guard Academy in 1983, earning a Bachelor of Science degree in Civil Engineering. In 1992, he was awarded a Master's Degree in Public Administration from the University of Connecticut, and in 2006, completed a one-year National Security Fellowship at Harvard University's Kennedy School of Government. He and his wife, Dawn, have five children - Kelsey, Lindsey, Annaliese, Eric, and Zachary.

Since joining the Senate in 2002, Senator Murkowski has worked tirelessly for Alaskans and earned a reputation in the Senate for her ability to work collaboratively and across the aisle to reach common sense solutions. Murkowski is well-known for her love and dedication to her state, which means putting Alaska first.

A leader on energy and public lands issues, Senator Murkowski recognizes that sound national policy will promote not only job creation and economic growth, but also higher standards of living and greater global stability. She supports the safe and efficient production and use of all forms of domestic energy, as well as research to help develop emerging technologies. Senator Murkowski continues to pursue policies to advance renewable energy, increase energy efficiency, and make America’s energy cleaner, more affordable, and more reliable.

Senator Murkowski has long advocated for the Arctic as a national priority and continues to push the United States to invest in the infrastructure and assets critical to supporting an Arctic strategy. She is leading the charge to recapitalize and expand America’s fleet of icebreakers and has introduced legislation to raise the nation’s presence in the Arctic through two bills that support responsible research and development as well as giving those who live in the region a greater voice on policy and research.

Murkowski was born in Ketchikan and raised in towns across the state, including Wrangell, Juneau, Fairbanks, and Anchorage. She is married to Verne Martell, and they have two grown sons. Lisa loves spending time in the Alaska outdoors. She’s an avid skier, has hiked on glaciers, enjoys fall duck hunts, and has an impressive King Salmon mounted on her office wall.

Heather Conley is senior vice president for Europe, Eurasia, and the Arctic and director of the Europe, Russia, and Eurasia Program at CSIS. Prior to joining CSIS as a senior fellow and director for Europe in 2009, Conley served four years as executive director of the Office of the Chairman of the Board at the American National Red Cross.

From 2001 to 2005, she was deputy assistant secretary of state in the Bureau of European and Eurasian Affairs with responsibilities for U.S. bilateral relations with the countries of Northern and Central Europe. From 1994 to 2001, she was a senior associate with an international consulting firm led by former U.S. deputy secretary of state Richard L. Armitage.

Ms. Conley began her career in the Bureau of Political-Military Affairs at the U.S. Department of State. She was selected to serve as special assistant to the coordinator of U.S. assistance to the newly independent states of the former Soviet Union, and she has received two State Department Meritorious Honor Awards.

Ms. Conley is frequently featured as a foreign policy analyst and Europe expert on CNN, MSNBC, BBC, NPR, and PBS, among other prominent media outlets. She received her B.A. in international studies from West Virginia Wesleyan College and her M.A. in international relations from the Johns Hopkins University School of Advanced International Studies (SAIS).

Victoria Herrmann is a 2021-2022 White House Fellow placed with the Commandant of the U.S. Coast Guard. Prior to the Fellowship, Dr. Herrmann was an Assistant Research Professor at Georgetown University, a National Geographic Explorer, and the Managing Director of The Arctic Institute, a nonprofit with a mission to inform policy for a just, sustainable, and secure Arctic. Victoria directed strategic planning and oversaw the implementation of global research partnerships by a 45-person team.

Her research focused on Arctic climate change and resilience. As a recognized expert in the field, Victoria has testified before the House and Senate, served as the Alaska Review Editor for the National Climate Assessment, and contributes to national and international media. At Georgetown, she served as the Principal Investigator of a National Science Foundation-funded Research Coordination Network on Arctic migrations. The three-year initiative aims to build a lasting, policy-oriented network of Arctic scientists to strengthen communication between nations and scientific disciplines.

Beyond the Arctic, Victoria studies climate-induced displacement, migration, and relocation in North America and Fiji as a National Geographic Explorer. In her first National Geographic project, America’s Eroding Edges, she traveled across the country interviewing 350 local leaders to identify what’s needed most to safeguard coastal communities against the unavoidable impacts of climate change.

Her project, Rise Up to Rising Tides, is creating an online matchmaking platform that connects pro bono experts with climate-affected communities. The project seeks to safeguard heritage by connecting national expertise to some of the 13 million Americans at risk of being displaced due to rising waters in the coming years.

Victoria was a Junior Fellow at the Carnegie Endowment for International Peace, a Fulbright Awardee to Canada, and a Mirzayan Science and Technology Policy Graduate Fellow at the National Academies of Sciences. She received her Ph.D. from the University of Cambridge as a Gates Scholar, an M.A. in International Affairs from Carleton University, and a B.A. from Lehigh University. 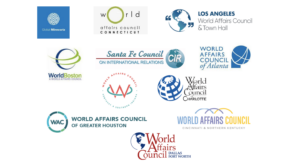