The World Affairs Council of Orange Country is part of the World Affairs Councils of America, a nonprofit and nonpartisan national organization based in Washington, DC. WAC Orange County's mission is to educate and inform our members and community citizens on important and critical issues concerning world affairs. With nearly 100 councils across 40 states reaching more than half a million people annually, the members of this local Council share an affinity with individuals across America.

May 20 | Webinar with Prof. Ziblatt and Prof. Levitsky 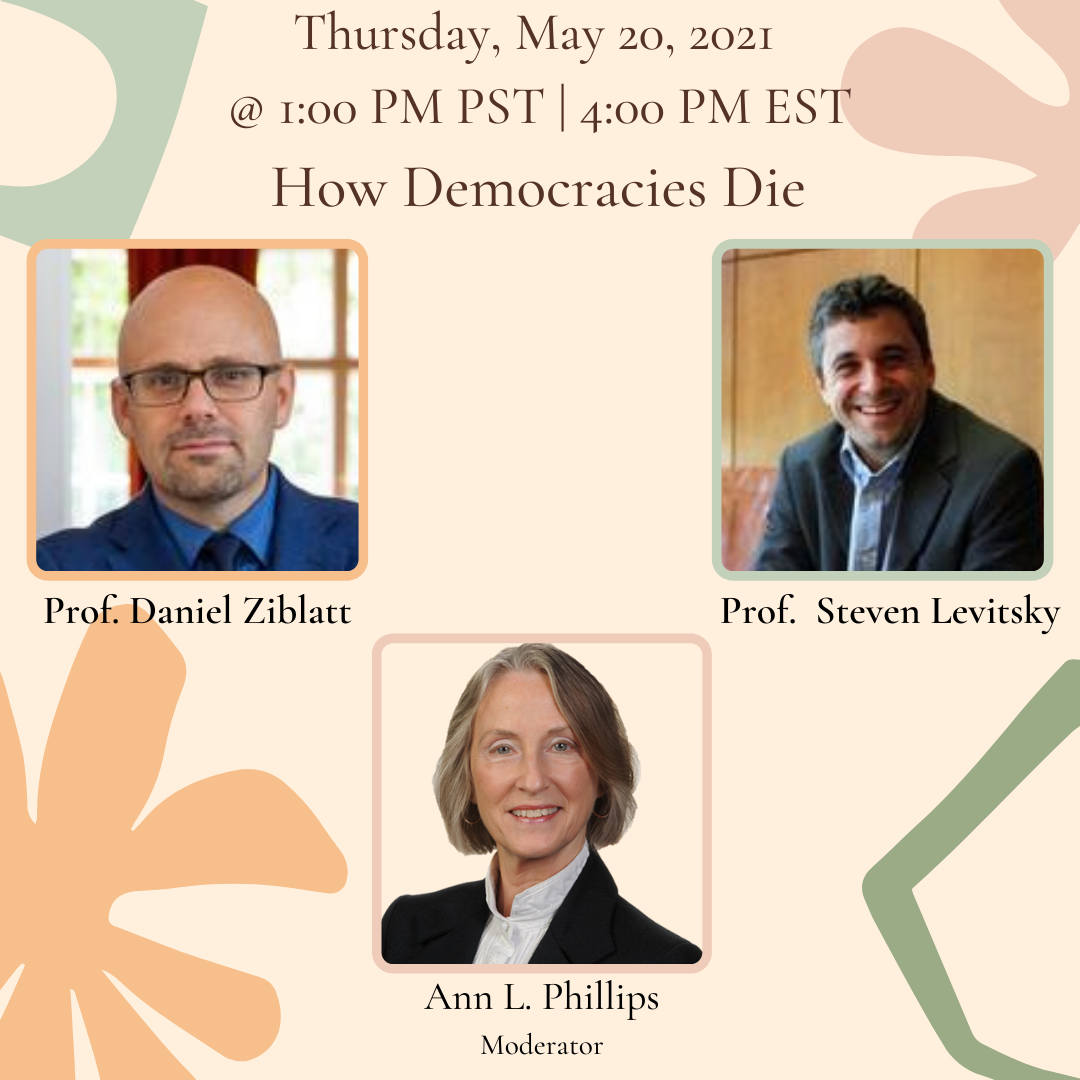 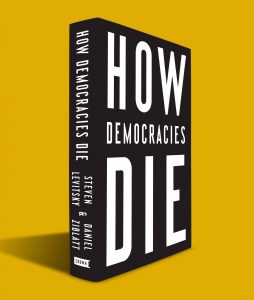 Praise for How Democracies Die

How Democracies Die: What History Reveals About Our Future

“If you only read one book for the rest of the year, read How Democracies Die. . .This is not a book for just Democrats or Republicans. It is a book for all Americans. It is nonpartisan. It is fact based. It is deeply rooted in history. . . The best commentary on our politics, no contest.”—Michael Morrell, former Acting Director of the Central Intelligence Agency (via Twitter)

“A smart and deeply informed book about the ways in which democracy is being undermined in dozens of countries around the world, and in ways that are perfectly legal.”—

“Two years ago, a book like this could not have been written: two leading political scientists who are expert in the breakdown of democracy in other parts of the world using that knowledge to inform Americans of the dangers their democracy faces today. We owe the authors a debt of thanks for bringing their deep understanding to bear on the central political issue of the day.” —Francis Fukuyama, John’s Hopkins SAIA and author of Political Order and Political Decay.

Daniel Ziblatt is Eaton Professor of the Science of Government at Harvard University and resident faculty at the Minda de Gunzburg Center for European Studies (CES). At CES, he co-chairs the Seminar on Democracy – Past, Present, Future.

Ziblatt specializes in the study of European politics, state-building, democratization, and historical political economy. His latest book How Democracies Die (co-authored with Steven Levitsky) was on the New York Times bestseller list and has been translated into 22 languages.

His second book Conservative Parties and the Birth of Democracy (2017) offers a new interpretation of the historical democratization of Europe, drawing lessons for new and old democracies under siege today. His book Structuring the State: The Formation of Italy and Germany and the Puzzle of Federalism (2006) draws lessons from nineteenth century experiences of state-building in Italy and Germany.In recent years he has been a fellow or visiting professor at the European University Institute (Florence, Italy), Center for Advanced Study (Stanford), Max Planck Institute (Cologne), University of Munich, and the Ecole Normale Superieure (Paris).

Steve Levitsky is a professor of government at Harvard University and coauthor of the 2018 New York Times bestseller How Democracies Die, with Daniel Ziblatt. In it, they argue that democracies die not because of revolutions or military coups, but due to the slow weakening of critical institutions and the gradual erosion of political norms.

Levitsky is a former Kellogg visiting fellow and an expert on Latin American politics. His research interests include political parties, authoritarianism and democratization, and weak and informal institutions. He is researching the durability of revolutionary regimes, the relationship between populism and competitive authoritarianism, problems of party-building in contemporary Latin America, and party collapse and its consequences for democracy in Peru.

He is co-author, with former Kellogg Visiting Fellow Lucan Way, of Competitive Authoritarianism: Hybrid Regimes after the Cold War (2010); author of Transforming Labor-Based Parties in Latin America: Argentine Peronism in Comparative Perspective (2003); and co-editor of The Resurgence of the Left in Latin America (2011), Informal Institutions and Democracy: Lessons from Latin America (2006), and Argentine Democracy: The Politics of Institutional Weakness (2005).

He has contributed to a number of Kellogg Working Paper Series and to volumes resulting from Kellogg conferences, including Party Systems in Latin America: Institutionalization, Decay and Collapse, edited by Scott Mainwaring, former director of the Kellogg Institute (Cambridge University Press, 2018).

Ann L. Phillips is the senior advisor to the Nagorno-Karabakh Project, part of the Inclusive Peace Processes program at USIP. In addition to ongoing research and writing, she has drafted a conflict assessment, helped develop the workshop agenda for journalists from the region, and worked on other options for engagement.

Previously, she was senior advisor to USIP’s civilian-military relations program, which focused on improving the effectiveness of civilian and military actors working in the same conflict-affected or fragile state. In addition, she co-led workshops in the ACOTA program for African Union peacekeepers and led the governance module for the Ministry of Defense Advisory program for U.S. advisors detailed to foreign countries.

From 2007 until 2011, Phillips developed and directed the Program for Security, Stability, Transition & Reconstruction at the George C. Marshall European Center for Security Studies in Garmisch-Partenkirchen, Germany. Before that, she was a senior political economist in the Policy and Program Coordination Bureau at USAID and was detailed to the Office of the Director of Foreign Assistance, Department of State, as a senior policy analyst and country team leader between 2006-2007.

Prior to joining the government, Phillips was a faculty member at American University and Smith College; Fulbright professor at the Friedrich Schiller Universität; and guest professor at the University of Rostock. She earned a doctorate from Georgetown University in international relations and comparative politics with a regional concentration on the former Soviet Union and Eastern Europe, as well as a master’s in international relations from Johns Hopkins University. 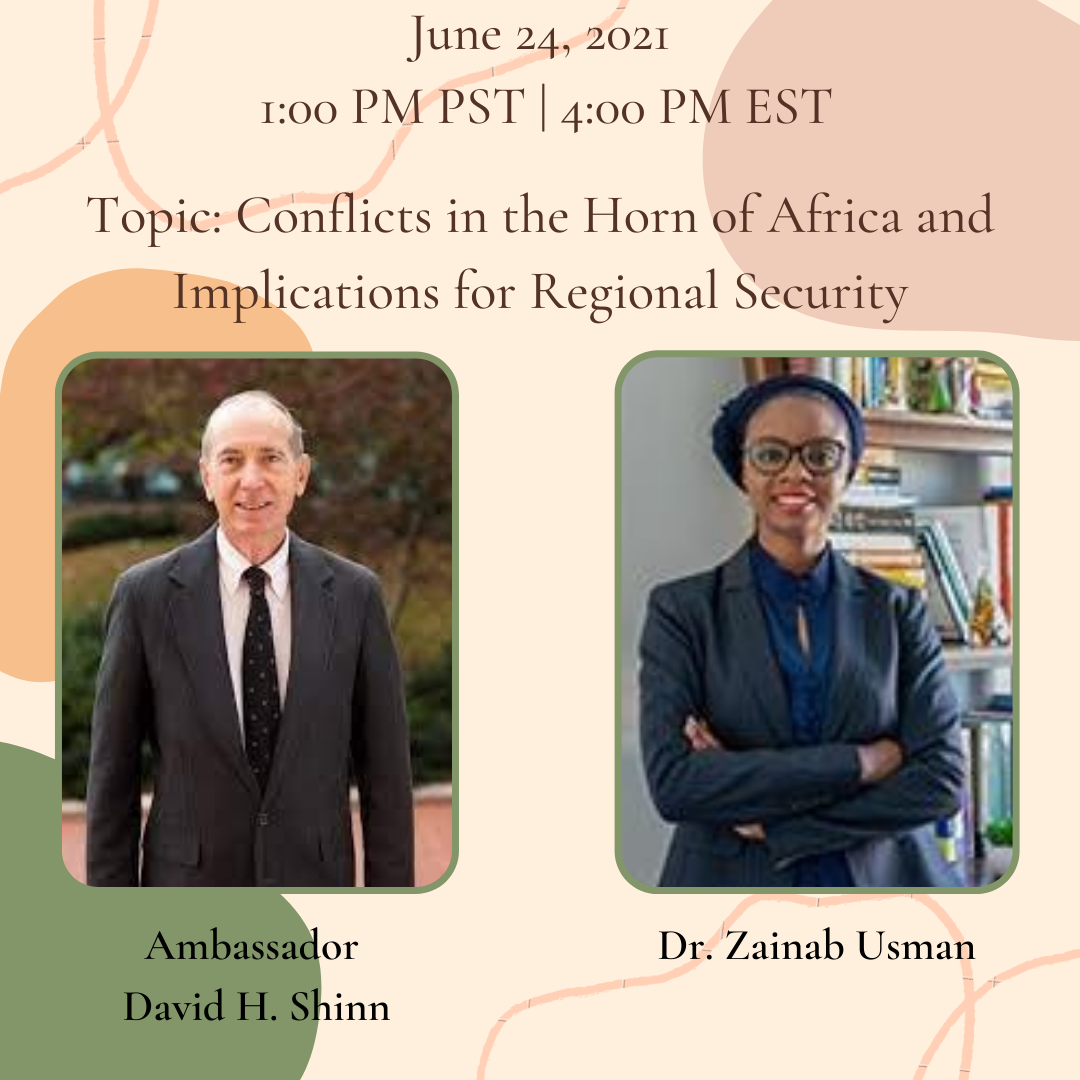 Conflicts in the Horn of Africa and Implications for Regional Security

He has a certificate in African studies from Northwestern University.  During his tenure in the US Foreign Service, he had assignments at embassies in Lebanon, Kenya, Tanzania, Mauritania, Cameroon, and Sudan, outside of his duties as ambassador.

He has been teaching at the Elliott School since 2001 and serves on a number of boards of non-governmental organizations. An expert on the Horn of Africa, Dr. Shinn speaks at events around the world.

He is the coauthor of China and Africa: A Century of Engagement (2012), the Historical Dictionary of Ethiopia (2013), Hizmet in Africa: The Activities and Significance of the Gulen Movement (2015), and has authored numerous articles and book chapters.

His research interests include China-Africa relations, Chinese diplomacy, East Africa and the Horn, terrorism, Islamic fundamentalism, conflict situations, US policy in Africa, and the African brain drain.  He speaks several languages including English, French, and Swahili.

Dr. Zainab Usman is a senior fellow and director of the Africa Program at the Carnegie Endowment for International Peace in Washington, D.C. Her fields of expertise include institutions, economic policy, energy policy, and emerging economies in Africa. Her forthcoming book, Economic Diversification in Nigeria: The Politics of Building a Post-Oil Economy, is set to be published by Zed/Bloomsbury Press in November 2021.

Prior to Carnegie, Usman was at the World Bank initially as part of the prestigious Young Professionals Program and later as a public sector specialist. At the World Bank, she worked on social sustainability, policy reforms, natural resources management, and disruptive technologies. She has worked on these issues in Cote d’Ivoire, Morocco, Nigeria, Papua New Guinea, the Republic of Congo, Serbia, Tanzania, and Uzbekistan. She has also worked at the Blavatnik School of Government at the University of Oxford and has consulted for the Department of International Development (DfID) and the Office of the National Security Adviser (ONSA) in Nigeria.

Usman’s research has been published on various academic, policy, and media platforms. She is co-editor of the book, The Future of Work in Africa: Harnessing the Potential of Digital Technologies for All. She also contributed to World Bank’s flagship report on Rethinking Power Sector Reforms in Developing Countries. Usman’s other analytical pieces have been published with the journal of African Affairs, the World Bank’s Policy Research and Working Paper Series, and as book chapters in edited volumes with Oxford University Press and James Currey. Her written and broadcast commentary has appeared in Al-Jazeera English, African Arguments, CNN, and Washington Post, among others.

She sits on the advisory board of the Energy for Growth Hub in Washington, D.C., and on the editorial board of Premium Times in Nigeria.

Back to Member Listing

Find a member in your area: